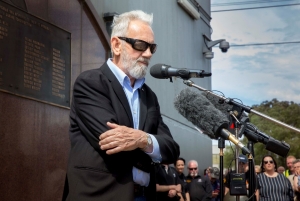 A two hundred strong crowd gathered under the span of the West Gate Bridge in Douglas Parade in Spotswood on Monday 15 October, to remember the 35 workers who lost their lives on the same day in 1970.

Former West Gate Bridge rigger and crane operator Pat Preston said how heartening it was to see so many young people attending the event And 48 years after Australia’s worst-ever workplace catastrophe, which claimed the lives of more the half the men working on that side of the bridge at the time. “Those of us who were there on the day are becoming fewer and fewer,” he said, “and it’s really important that we continue to honour their memory.”

Pat was 29 years old the day the Bridge came down and was among the survivors who returned two years later to complete the now famous Melbourne icon, which opened to traffic on 15 November 1978.

While Pat remains forever changed by the events of that day, it inspired a life-long commitment to workplace safety.  Many of the safety initiatives now entrenched on Australia work-sites, he put in place during the final construction stage of the West Gate Bridge, years ahead of the passing of the Victorian Health and Safety Act (1985).

“I wanted to make sure that, across the country, everyone who turned up for work on a building site would be able to go back home to their family at the end of the day,” he said at the service.

Nearly half a century on, Pat would like to think an accident like this couldn’t happen today. “Workers are more aware of health and safety and we’ve got legislation in place, but it doesn’t take much on an unorganised job for safety to be ignored,” he said. “We need to keep fighting for safe workplaces.”

Pat Preston is a guest speaker at the Art & Industry ‘How to Build Bridges’ Symposium on Friday 23 November from 10:00am to 6:00pm at the Substation in Newport.  The event is free but registration is required.