Laverton: A Place to Make Our Own 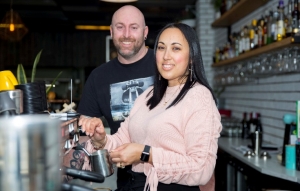 Café owners Dale and Kate Bayliss of Favor + Grace in Laverton came to the suburb about 5 years ago to buy their first house. A chance encounter with an undrinkable coffee at a local car wash made them both think this could be the right time to realise a long-held dream to open their own café.

They bought a house and signed a lease on a vacant building in the same week. “We’re both fixer uppers,” Dale said. “We did all the work ourselves.”

They put every cent of their own money into the café refurbishment, to the extent that the night before they opened they didn’t have $20 to spare for a pizza.

“You have to throw everything at something like this if you want to make it work,” Dale said.

Kate and Dale are excited to be involved in the Art & Industry Festival this year as part of ‘A Night in Laverton’ because they’re keen to showcase what Laverton has to offer.

“We’ve been told our café looks like it belongs in Fitzroy,” Dale said, “but we think it is so Laverton in the sense that everything is done with love. It’s very family-oriented and everything is made in-house.”

For a lot of people who live in the West, Laverton is just another stop on the train line into the city. Dale and Kate are now seeing a lot of younger people, unable to afford in the inner West, giving Laverton a closer look to buy their first house. “It’s so much more than a train station,” Dale said.

On Friday 23 November, Favor + Grace will host an exhibition based on tattoos and showcase their cocktail making prowess. Two shipping containers will pop up outside from 6:00pm to screen locally-made, industrially-inspired films. The fabulous Lady Midnight will perform from 8:00pm.

Find out more about ‘A Night in Laverton’ and other AIF18 events at www.artandindustryfestival.com.au