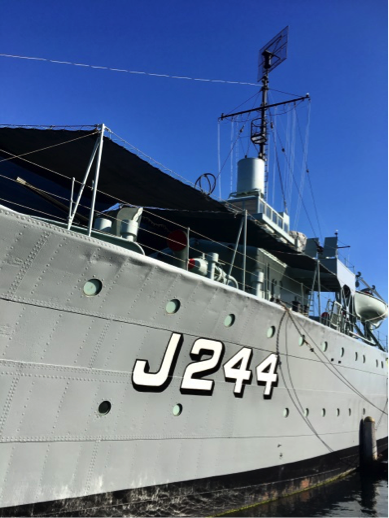 Melbourne has many beachside suburbs, but Williamstown’s relationship to the sea is deeper than the water that laps at its beaches and piers. From street names to historic buildings, Williamstown’s identity has been forged by the maritime industries critical to its development since the middle of the 19th century.

Bustling Nelson Place has long been the heart of waterfront Williamstown, and at the end of Gem Pier is a lovingly protected treasure – the HMAS Castlemaine.

The Castlemaine is one of 60 Corvettes built in Australia during World War II and is the last one still afloat. She was commissioned in June 1942 and used as an ocean escort and minesweeper in places such as Papua New Guinea and Hong Kong during and following the war, before serving as a training vessel at HMAS Cerberus until being taken out of service in 1972. She sat untended for several years, until the Maritime Trust of Australia took over to restore the Castlemaine to her 1945 configuration.

“The ship was quite a mess back then,” trust secretary Peter Driver says. “The first-generation restorers did a huge amount of hard work.”

HMAS Castlemaine was built in Williamstown – just 600 metres from her home at Gem Pier – and, along with her fellow Corvettes, represented an important point in Australia’s naval history. The Corvettes were the first class of ship that was fully designed, built and maintained in Australia. Peter likens them to a back pocket in football – “They have an important role but people forget their names and they leave without a lot of recognition.”

The volunteers who restored and now maintain the vessel in pristine working order come from all walks of life. There are ex-servicemen from World War II, Vietnam and beyond, as well as people like Peter, who simply have a passion for the sea, the ship and her fascinating history.

If you’re lucky, you’ll meet Alf “Bluey” Thornton, a World War II veteran who is still climbing up and down the ship’s steep ladders at the age of 96. Bluey served on seven ships as an anti-aircraft gunner and was a crew member of HMAS Sydney, which sank with all hands lost in 1941. “I was on a training course when it happened,” he says. “It was a very strange feeling.” He preferred smaller ships such as Castlemaine’s counterparts HMAS Goulburn and HMAS Geelong. “I was never seasick on smaller ships, and they were more individual than the big ones.”

Visitors can explore the ship, see the original engines turn, ring bells, and use voicepipes to relay messages between compartments. “We need to remember our past,” Peter says. “That doesn’t mean glorifying war – we focus on the social aspects of what life was like.” That said, he admits that many visitors enjoy traversing the guns. “They are a drawcard.”

HMAS Castlemaine is located at Gem Pier, Nelson Place, Williamstown, and is open on weekends and public holidays from 10am-4pm. Admission is $6 for adults, $3 for children aged 4-16 or $15 for families (two adults and two children). Guided tours are usually available. Group bookings and school groups are also welcome, including outside normal opening hours by prior arrangement. For more information, phone (03) 9397 2363 or visit http://hmascastlemaine.org.au