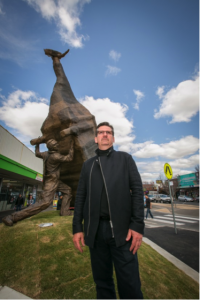 Internationally renowned artist John Kelly spent much of his life wondering when he would get out of Sunshine.

Now, his super-sized sculpture Man Lifting Cow – cast in a Sunshine foundry, no less – has created a permanent link between his family and the suburb.

Kelly’s work has been exhibited from Paris to Sydney, as well as places such as Monte Carlo, The Hague and Glastonbury, but it was his parents’ support and belief that allowed him to attend art school and realise a dream.

“I’m thrilled for my parents to see this monumental sculpture,” Kelly says from his current home in West Cork, Ireland. “So much of my journey was about getting out of Sunshine, but I’m incredibly proud to give something back.”

His Irish father and British mother immigrated to Australia in 1965 – the year he was born. He has lived in all three countries but considers himself an Australian no matter where he is.

“I felt very lucky to grow up in Australia. It’s more egalitarian than the UK or the United States – the ‘fair go’ permeates society,” Kelly says.

“Sunshine embodies that – there was this movement of people who just needed to go somewhere, then succeed and prosper. The restaurants reflect nearly every conflict scene since World War II.”

Aside from spending time with his elderly parents, he enjoys Sunshine’s culinary variety when he visits. His favourite place to eat is Co Do, a Vietnamese restaurant in Hampshire Road not far from Man Lifting Cow.

While Kelly’s passion for art led him to feel out of place in Sunshine during his younger years, he points out that the traditionally working-class suburb has been home to some significant alumni, including ACDC’s Bon Scott and artists such as Leigh Bowery and Stelarc.

“I hope this sculpture is an avant-garde piece in an area of great change and development,” Kelly says.

He would one day love to see a rail trail connect Man Lifting Cow with Cow In A Tree in Docklands, creating an art journey through Melbourne’s west to the waterfront. “How good would that be?”